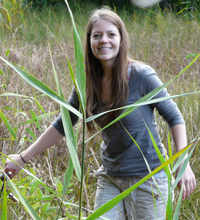 My interests are broadly in evolution and ecology, and specifically in the genetic processes governing adaptation to local environments. Understanding these processes will allow us to predict how species may react to environmental change. This has important implications for management strategies in agriculture (e.g. maintenance of animal and crop production, pest management), and wildlife conservation (e.g. designating conservation units, predicting viability to environmental change).

Widely distributed species are exposed to a number of different environments. We expect to find gradual changes in locally adapted populations of a species distributed across an environmental cline. During my PhD I will investigate the adaptive landscape of a common European frog, Rana temporaria, across its altitudinal distribution in the Swiss alps. I will use a landscape genomic approach, which attempts to correlate genomic variation with environmental variables.

Latitude and Altitude are often used as proxies in the investigation of climate change on species ranges. However, the large geographic distances across latitudinal gradients make it difficult to disentangle neutral genetic structure from patterns of natural selection. As a second part of my project I will compare the adaptive landscape of Rana temporaria across altitude in Switzerland and a latitudinal gradient in Sweden. Given the differing levels of gene flow expected over these gradients, the demographic histories, and the extent and mechanism of local adaptation may be completely different.